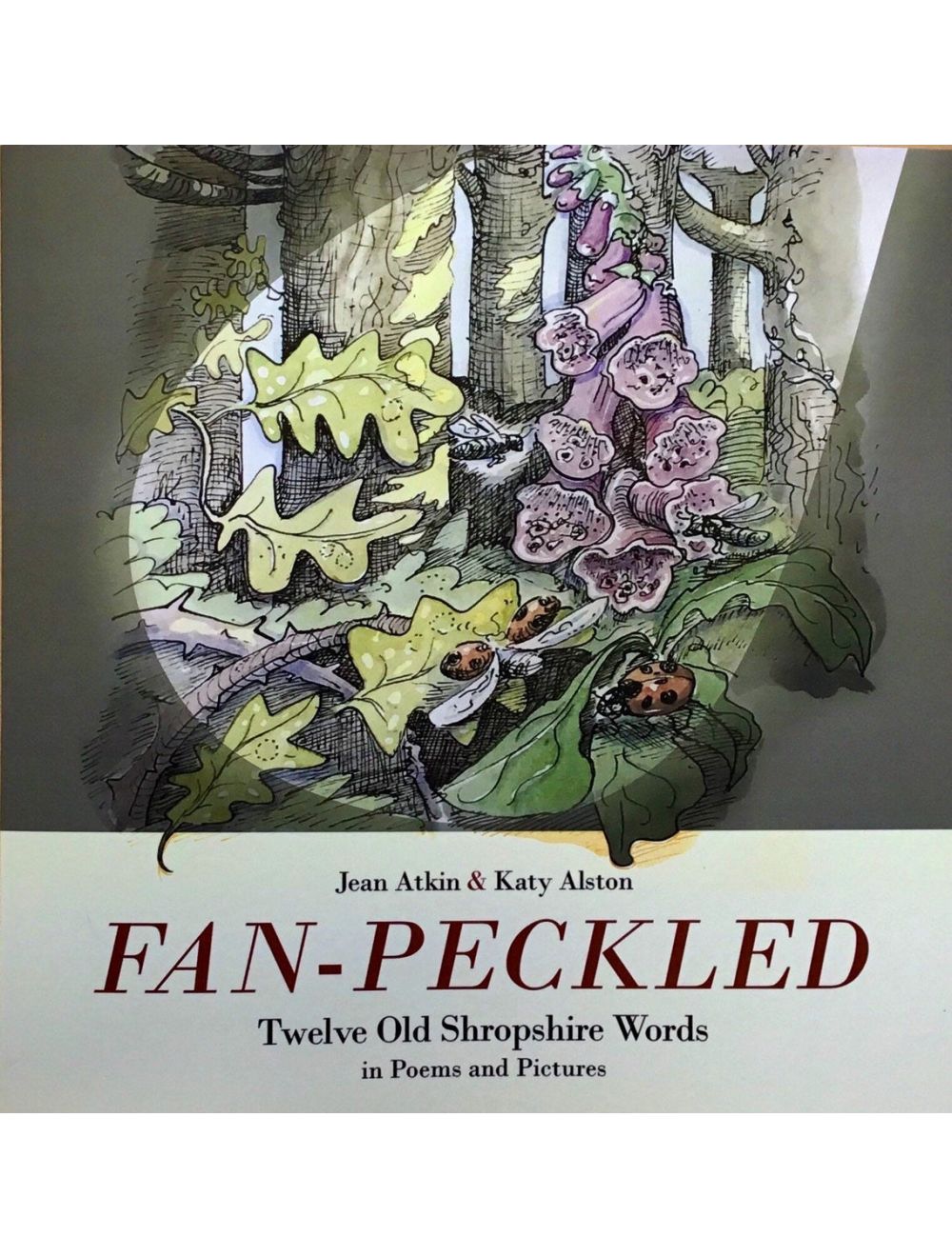 'Fan-Peckled' is a pamphlet of twelve poems by Jean Atkin, each illustrated by Katy Alston. An intuitive collaboration between poet and illustrator, it explores idiomatic language of historic Shropshire. Margaret Adkins

Word-lovers will relish reading these poems out loud. Jean Atkin has selected twelve words from Georgina Frederica Jackson’s Shropshire Word-Book, an 1879 glossary of archaic country terms and, using a similar approach to Robert MacFarlane’s The Lost Words, written a poem featuring each one.

Twelve poems and twelve art-illustrations based on old Shropshire Words

These poems were inspired by: The Shropshire Word-Book, A Glossary of Archaic and Provincial Words, Etc., Used in the County By Georgina F. Jackson. First Published 1879 by Adnitt & Naunton, Shrewsbury

Jean Atkin is a wise guide to a rich Shropshire legacy: in FAN-PECKLED a cornucopia of verbal ‘oddlings’ come vividly to life through a kaleidoscopic cast of characters – bird, beast and human – all lit by Katy Alston’s colourful illustrations. Every word lover will relish this beautiful book. NANCY CAMPBELL.

I loved this book! It spells Shropshire for me. And Katy Alston’s illustrations bear comparison with Ravilious and Ardizzione. KATHERINE SWIFT

This glorious book of poems and pictures by ⁦Jean Atkin and Katy Alston. Forgotten words given new life, which is one of the great functions of artistic endeavour. IAN McMILLAN

This is not a romanticised collection. Readers encounter flooding, an abused work horse and a labourer needing to transfer skills in a time of changing economics. It is a collection of acute, tender observations and a reminder that although the years pass, what matters remains and people’s sensibilities continue as before, regardless. MARGARET ADKINS Full review is here

Katy Alston’s gorgeous illustrations combine with Jean Atkin’s well-tuned ear to recreate a bygone age I can’t help but yearn for as I read the poems and linger with the illustrations. For me, the poems recall John Clare and Edward Thomas. To read them out loud, and to hear these lost words speak again, is pure pleasure. SPHINX Full Review is here

£12.00
Availability: In stock
SKU
978-1-911048-49-7
Add to Wish List Add to Compare
Details
Published By Fair Acre Press. 216 x 216mm square paperback. Full colour throughout. ABOUT THE POET Jean Atkin has published two full collections: Not Lost Since Last Time (Oversteps, 2013) How Time is in Fields (Indigo Dreams Publishing, 2019). Her widely published and prize-winning poetry has featured on BBC Radio 4’s ‘Ramblings’ with Claire Balding, and been commissioned for ‘Something Understood’. In 2019 she was Troubadour of the Hills for Ledbury Poetry Festival, and BBC National Poetry Day Poet for Shropshire. She works as a poet in education and community

ABOUT THE ARTIST-ILLUSTRATOR Following a degree in Fine Art, Katy spent some years painting and studied at West Surrey College of Art, now UCA. She now works mainly in illustration, making artist’s books, illustrated maps and natural history illustrations. As she’s often to be found trawling through documents of old Shropshire and field names maps, it felt very natural and logical to be making pictures for the ‘Fan-peckled’ poems and it has provided her with inspiration for her latest work.